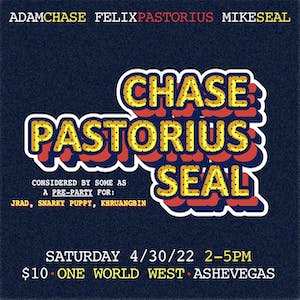 Chase, Pastorius & Seal is a new Supergroup that is taking the music scene by storm. With three accomplished virtuosic musicians coming together, the trio is impressive in its existence before even knowing what the music sounds like.
With each player having a unique approach to their instrument, the performances are nothing short of inspiring, if not mind-melting. For lovers of funky jazz and virtuosic musicianship, this group delivers on all fronts.

FELIX PASTORIUS
https://felixpastorius.com
Bassist, Felix Pastorius bears the name of his father, whose reputation often proceeds him. While the lineage is intriguing for most, the dedication to the mastery of the bass guitar is more notable than his last name when it comes to the musician that is Felix Pastorius. Having toured with the YellowJackets as a teenager and traveling the world with groups including Jeff Coffin’s Mu’tet, Cindy Blackman Santana Group, Hipster Assassins and Aesop Rocky, Pastorius has continued to prove to be able to do anything imaginable on the bass guitar. From the most complex explorations to the tastiest pocket grooves. Pastorius alone is worth the cost of admission.

MIKE SEAL
https://mikesealmusic.com
Grammy nominated Guitarist and composer, Mike Seal is considered one of the best guitar players in the country. With a unique style of picking the guitar, Seal has earned himself a seat at the table with some of the best pickers in bluegrass as the full-time guitarist for Jerry Douglas and long-time collaborator of virtuosic mandolin player, Sierra Hull. Seal and Pastorius first collaborated while touring with the Jeff Coffin Mu’tet. Performing with Chase, Pastorius & Seal is reminiscent to the Jeff Sipe Trio, which featured Mike Seal and Taylor Lee.
One World Brewing food truck will be open with brunch/lunch menu!
$10 Eventbrite Pre-sale/$12 DOS