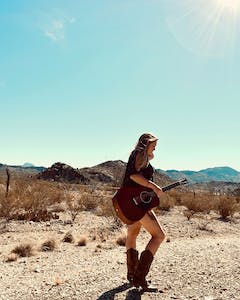 Alma (say it like “Alamo”) lives in Whittier, NC when she’s not on the road. She plays patchwork music: country, folk, and Appalachian roots sewn together to make something unique. Songwriting is cheaper than therapy, and old songs make her happy.

She fell in love with Appalachian culure and music as a child, started learning historic Scotch-Irish murder ballads, and took up fiddle at 12. Banjo and guitar followed, and then she made friends with a hobo who taught her to write songs, so that’s what she keeps doing. Music has taken her lots of places, from the hometown bars, to church, to the highway. She spent a while performing as an entertainer on the passenger train in Bryson City, NC, and once she wound up getting 3 yeses from ABC’s American Idol Judges on Season 1 and being sent to Hollywood, CA. She recently recorded a critically acclaimed album in an abandoned church in the West Texas desert.

Music continues to give her stories to tell, and these days she lives on the road for months at a time, playing her songs for whoever will listen. It’s her favorite thing to do and she’s thankful to be here!