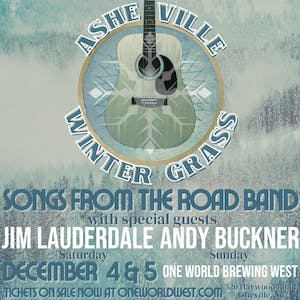 This will be a winter afternoon of fun with live outdoor music from Bluegrass Stars Songs From The Road Band.

Songs From The Road Band
Songs From The Road Band is an Asheville, North Carolina based bluegrass supergroup featuring Mark Schimick (mandolin), Charles Humphrey III (bass), Sam Wharton (guitar), James Schlender (fiddle), and Gabe Epstein (banjo). The band takes flight with virtuosic picking, singing, and Grammy Award-winning songwriting. Their live show has been compared to watching a NASCAR race. It’s exciting and unpredictable, but you’re always wondering if there’s gonna be the thrill of a crash. Their most recent single, “Amarillo Blue,” went to number one on the Bluegrass Today Grassicana chart for five weeks straight. They have 6 studio albums available at all musical outlets.

Jim Lauderdale: Jim Lauderdale has never been content to sit still in any one musical place for long, effortlessly cycling through a wide range of country, rock, and bluegrass shades of Americana. But “Hope,” album number 34 in the two-time GRAMMY® award-winning singer-songwriter’s distinguished career, nevertheless stands out stylistically as well as thematically. After a year of locked-down isolation, “Hope” finds Lauderdale breaking out with wide-open arrangements along the lines of Neil Young, The Grateful Dead and Little Feat.