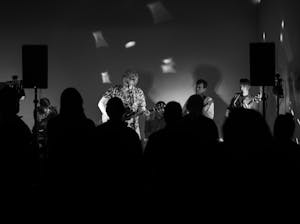 Ben Butterworth of Richmond, Virginia has been writing and performing his own original music for more than a decade. From bluegrass to psychedelic country, from merch guy to front man, from Montana to Miami. Over the years, Ben has been in several bands and projects; ranging from bluegrass with The Inflatables, to psychedelic country in Captain Grandpa and Ben & The Bajas. Ben has a knack for putting together great musicians, and regardless of the ensemble name, you can always bet on Ben’s band to be fantastic.

In November of 2021 Ben independently released his debut solo album – Purgatory Emporium. The album consists of ten original songs, steeped in Ben’s southern musical traditions and flavored with a wide range of influence. Recording an album during the summer of 2020 presented many unique challenges, but also an opportunity… Friends who would have been out on the road any other year were hunkering down locally and had all the time in the world.
Many of the tracks explore feelings of loss or feeling lost, being stuck between self-actualization and self-destruction, hanging out in a limbo…a flux. Somewhere between now and then, in an antique store between Heaven and Hell. Welcome to the Purgatory Emporium.

Ben Butterworth has shared the stage with Palm Palm, Pigeons Playing Ping Pong, Keller Williams, Toubab Kewe, Larry Keel, Carolina Chocolate Drops, The California Honeydrops, and more, performing in bars and bandstands across the country. This spring and further into 2022, Ben will be performing and recording more music. Keep your ears unzipped and stay tuned!
https://www.benbutterworth.net/