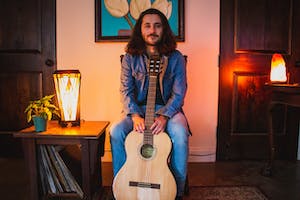 Blase is a multi-instrumentalist currently based out of Asheville NC. He is a nationally toured musician who dug his roots deep in the Chicago indie scene back in 2010. Since then he has recorded on over fifteen records and has released eighteen of his original songs. Blase now resides in Asheville’s Land of the Sky mountains where he continues to record, produce, and perform. He is currently promoting his debut full length record “Vertigo Valley” which he will be releasing in June 2022.