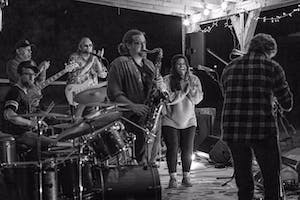 From Park Hills, Northern Ky…
Brothers Wes and Aaron Smith have been performing as and leading Brother Smith since 2015.  What began as a roots driven acoustic duo has transformed into a progressive auditory ensemble to be reckoned with.  ​Featuring new members Trevor Caddell (saxophone) and Amberly Winfrey (vocals), Brother Smith’s sound continuously evolves with inspirations that span across several genres, including: rock, funk, gospel, folk, blues, bluegrass, jazz, and country (to name a few).
​ Brother Smith’s latest release, “Blue Sod, Vol. II”, showcases the brothers’ multi-instrumental talents by splitting all the recorded instrument and vocal responsibilities between themselves (Wes and Aaron that is) while also featuring Caddell and Winfrey on the first track, “Kill the Weeds”.  Brother Smith is currently recording new music with plans for more releases this year and next