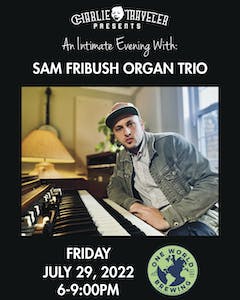 Sam Fribush:
WEBSITE: https://samfribush.com
HEAR SOME MUSIC: https://samfribush.bandcamp.com
SEE A VIDEO: https://youtu.be/ba3b7bkPwkE
Born in Greensboro, NC Fribush began his professional career at a young age, playing a variety of instruments including Steel Pan and Banjo.  In 2017, Fribush graduated from the New England Conservatory of Music with a degree in Contemporary Improvisation. During that time he worked with influential mentors like Ran Blake, Jason Moran, Jamie Saft, Dennis Montgomery III, Cecil McBee, John Medeski and more.  Fribush has recently produced and recorded music with Charlie Hunter, Lucius, Hiss Golden Messenger, Daron., Joel Savoy, Rob Frabroni, Adrian Olsen, Donna the Buffalo, Dori Freeman, Ric Robertson, and the California Honey Drops. In 2020 Fribush was asked to go on a world tour with Pokey LaFarge – that tour was cancelled due to COVID-19.

In 2021-2022 Fribush will be joining Hiss Golden Messenger supporting his new album: ‘Quietly Blowing It’‘ out on Merge Records.The funky sound of the Hammond organ is heard in all its greasy glory on two blazing new albums from the Sam Fribush Organ Trio — Vol. I: Riverboat and Vol II: The Root.  Produced by virtuoso guitarist Charlie Hunter, both records find Fribush, Hunter and drummer Geoff Clapp putting their special soulful spin on everything from jazz standards (Yusef Lateef’s “Plum Blossom,” Billy Strayhorn’s “A Flower is a Lovesome Thing”), New Orleans touchstones (Allen Toussaint’s “Riverboat,” Ellis Marsalis Jr.’s “Swingin’ at the Haven”), 70s R&B jams (Billy Preston’s “Will It Go Round in Circles,” The Impressions’ “We Must Be in Love”) and modern classics like D’Angelo’s “The Root” and Bonnie Raitt’s “Let’s Give Them Something to Talk About,” as well as a couple of Fribush originals. If you dig the likes of Jimmy McGriff, Big John Patton and Brother Jack McDuff, the Sam Fribush Organ Trio is most definitely in your wheelhouse.

Recorded in December 2020 at Stephen Lee Price’s Studio in High Point, NC, the sixteen tracks on Vol. I: Riverboat and Vol II: The Root came together with a minimum of fuss and a maximum of groove. “Basically everything was done in one or two takes, and they all sounded great,” says Fribush, a jazz piano graduate of the New England Conservatory of Music, who had established a sizeable following in New Orleans before moving back from the Big Easy to his hometown of Greensboro, NC last year. “I guess the muses were with me!”