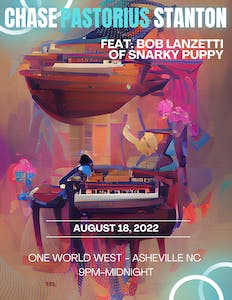 The collaborative supergroup brings together world-renowned musicians from Snarky Puppy, Hipster Assassins, Jazz Is Phsh, and The Chase Brothers. Each member of the band brings a powerful artistry to their craft. With each musician having worked together on various projects, this collaboration gives the group the opportunity to stretch out on a mix of original songs and reimagined popular songs.

FELIX PASTORIUS
Bassist, Felix Pastorius bears the name of his father, whose reputation often proceeds him. While the lineage is intriguing for most, the dedication to the mastery of the bass guitar is more notable than his last name when it comes to the musician that is Felix Pastorius. Having toured with the YellowJackets as a teenager and traveling the world with groups including Jeff Coffin’s Mu’tet, Cindy Blackman Santana Group, Hipster Assassins and A$AP Rocky, Pastorius has continued to prove to be able to do anything imaginable on the bass guitar. From the most complex explorations to the tastiest pocket grooves. Pastorius alone is worth the cost of admission.

JUSTIN STANTON
As a trumpet player, keyboardist, composer, and producer, Justin has developed a reputation as a multi-faceted musician who can serve an essential role to whichever artist he is contributing, both onstage and in the studio.

Justin attended the prestigious University of North Texas, where he performed for two years in the One O’Clock Lab Band, recording three albums as well as performing at major festivals throughout Europe. While at North Texas, Justin joined the group Snarky Puppy that, since its humble beginnings, has gone on to earn four GRAMMY Awards. Justin has performed and recorded with the group since 2006, appearing on the majority of their numerous studio and live recordings.

In addition to Snarky Puppy, Justin maintains an active schedule performing, recording, and writing with a variety of original artists and groups, including his newest project with Becca Stevens, Gisela João, Louis Cato, and Michael League entitled Mirrors. Recorded over two weeks in Portugal amidst the many challenges presented during the pandemic, each person co-wrote a song with one another, yielding ten songs that are personal to the respective pair of songwriters yet are all unified through the collaborative co-production and recording process.

Justin resides in Lisbon, Portugal, and is in constant demand for his ability as a multi-instrumentalist, knowledge of synthesis and sound design, familiarity with a broad spectrum of musical realms, and abundant creative energy.

Other solo releases from Justin include Secret Place, his genre-sweeping debut record of all-original material, and his exploration into Flor Peeters’s 35 Miniatures for Organ on a host of classic synthesizers.

BOB LANZETTI
Bob Lanzetti is a Brooklyn, NY based professional guitarist, composer, producer, and educator. He has performed and recorded with many artists throughout the NYC area as well as played in over 40 countries with the three time Grammy® Award-Winning jazz/funk collective, Snarky Puppy.

Growing up on the Jersey Shore, Bob had the fortune of studying music with NYC area based guitar greats Chris Buono, David “Fuze” Fiuczynski, and Vic Juris. In 2000, Bob moved to Denton, TX to further his education at the University of North Texas where he earned a Bachelor’s Degree in Jazz Studies. In addition to his studies he was fortunate enough to get involved in the thriving R&B and Gospel music scene in the DFW area as well as meet the musicians who would go on to form the core of Snarky Puppy.

As a member of Snarky Puppy, Bob has had the opportunity to contribute as a writer, arranger, and guitarist, playing on every recorded release and performing all over the world. The Pups have earned three GRAMMY Awards to date. Best R&B Performance in 2014 (“Something” featuring Lalah Hathaway), and Best Contemporary Instrumental Album in 2016 and 2017 (“Sylva” with Metropole Orkest and “Culcha Vulcha”, respectively).
Since 2006, Bob has been residing in Brooklyn, NY. There he has become an in-demand session guitarist performing and recording with many artists including Tommy Sims, Bokanté, Michelle Willis, Cory Henry, Ghost-Note (Robert “Sput” Searight/Nate Werth), Lucy Woodward, Musiq Soulchild, Bilal, Banda Magda, Underground System, and many others.