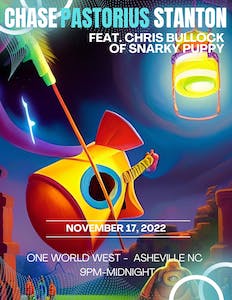 FELIX PASTORIUS
Bassist, Felix Pastorius bears the name of his father, whose reputation often proceeds him. While the lineage is intriguing for most, the dedication to the mastery of the bass guitar is more notable than his last name when it comes to the musician that is Felix Pastorius.
Having toured with the YellowJackets as a teenager and traveling the world with groups including Jeff Coffin’s Mu’tet, Cindy Blackman Santana Group, and Hipster Assassins, Pastorius has continues to prove to be able to do anything imaginable on the bass guitar. From the most complex explorations to the tastiest pocket grooves. Pastorius alone is worth the cost of admission.

JUSTIN STANTON
Justin attended the prestigious University of North Texas, where he performed for two years in the One O’Clock Lab Band, recording three albums as well as performing at major festivals throughout Europe. While at North Texas, Justin joined the group Snarky Puppy that, since its humble beginnings, has gone on to earn four GRAMMY Awards. Justin has performed and recorded with the group since 2006, appearing on the majority of their numerous studio and live recordings.
Justin appears on recordings with artists as diverse as David Crosby, Donald Fagen, Harry Shearer/Derek Smalls, Larry Carlton, Randy Brecker, Robert Glasper, Trombone Shorty, Musiq Soulchild, Kirk Franklin, Laura Mvula, and Salif Keita. He has also shared the stage with Joe Walsh, Michael McDonald, Toto, Derek Trucks, Terence Blanchard, Chris Potter, Eric Harland, and Fatoumata Diawara, to name a few.

CHRIS BULLOCK
Chris Bullock is a Brooklyn, NY-based saxophonist, multi-instrumentalist, and composer. He has enjoyed an expansive career performing with a variety of artists across all sorts of musical styles. Most notably, he is known for his longtime role as a saxophonist and composer in the genre-bending ensemble, Snarky Puppy. With this band, he has received four Grammy awards and is often on tour around the world performing at concert halls to music festivals to small rock rooms.

As a multi-instrumentalist, Chris has performed and recorded with a variety of artists including David Crosby, Michael McDonald, Lalah Hathaway, the Los Angeles Philharmonic, Charlie Hunter, Chris Thile, Eric Harland, Metropole Orkest, Phish, and Soulive. In addition to his work as a live musician, he recently wrote and recorded his first commissioned film score.

In 2018, Chris released his debut solo album, Boomtown. This music is a hybrid of sorts. On the album, Chris explored ways to combine his interests in improvisation, jazz, chamber music, electronic music, and hip hop production elements. With his Boomtown band, Chris has brought a synth-heavy, grooving sound environment on live tours across the US and Canada.