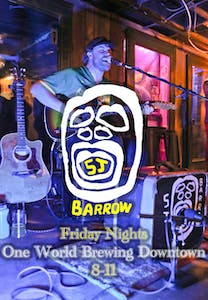 Inspiration seeped through the windows of apartment 5J on Barrow Street looking out over the Hudson River in NYC’s Greenwich Village, where singer-songwriters and Broadway performers, Eryn Murman and Jason Hite, soaked up the energy and passion of musicians, painters, poets and writers who created the Village vibe. Together, they paid tribute to those creative spirits and named their band 5j Barrow, writing music and lyrics with a unique folk/rock sound, touring as a duo, and often picking up Drew Jones on bass and Gerard Canonico on drums. The band has inspired audiences with soulful music, evocative imagery, and lyrics that touch the heart, from the historic Apollo Theater to the open air of Washington Square Park, from the streets of New Orleans to the Rocky Mountains, from California wine country to New England forests.
Woody Platt of the Steep Canyon Rangers says his interest was piqued when he came across their live show at the Asheville Regional Airport of all places.

5j Barrow was named “Best Band in NY” after winning The Greene Space WNYC/WQXR’s Battle of the Boroughs 2014. 5j Barrow released their debut album ‘From the Dim, Sweet Light’ in 2014, and their EP trilogy of The Journey Volumes 1, 2, and 3 were released from 2017-2019.
Find them playing in a town near you, book them for a house concert, and get personal insight on their ‘journey’ at https://www.patreon.com/5jBarrow – $5, $10 per month gives you special perks (personal monthly updates that only patrons see, ‘first to see’ videos of them playing their music and favorite covers all over North America, etc). 5j’s Patron’s have been huge support in keeping them on the road and sharing their music far and wide.