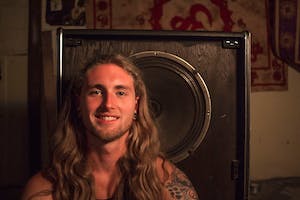 Jake Burns returns to One World Brewing in downtown Asheville, NC not once, not twice, but THREE times in the month of December!

Come out for a full night of original acoustic music and other fun jams!
(reggae/rock/folk/pop/singer-songwriter)

Raised in the Little Miami River Valley of southern Ohio, Jake Burns began his musical journey at a young age. With the encouragement of his parents he quickly became connected with music through piano, saxophone, guitar and then finding his voice at the age of 13 began fronting his own band in high school. This group carried over into his college years dubbing themselves Rockstead, a high energy four piece rock/reggae group that soon took flight all throughout the Midwest frequenting everything from house shows and street parties to college and music festivals alike. Jake is currently writing and performing with Rockstead as they continue to tour throughout the Eastern United States.

After his college years Jake began to formulate his own songwriting style inspired by love, travel and his own life experiences of learning and growing. Allowing the positive and universal message of reggae music to influence his writing Jake continues to expand it further with his singer/songwriter style, creating songs he hopes can connect people from all walks of life. Though he has only recently begun pursuing his solo career, Jake has already widened his reach with tours through the Midwest and new roots in Asheville, North Carolina. With plans to release his first EP in the near future he continues to spread his conscious music with all that will listen.