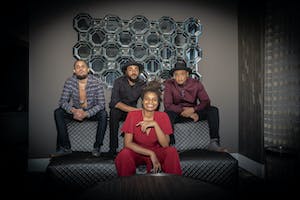 The Blue Ridge Mountains of North Carolina are steeped in old-world mystics, ancient medicines and a potent connection to nature. On the surface this might not seem synonymous with hip-hop but the roots of music run deep. This is the community that Asheville’s Free Radio has risen from.

Formed in 2012 by forever friends Austn Haynes and Johnny Reynolds, they released their debut album, “The Powers That Be” (produced by Haynes), that same year. Fueled by Austn’s beats that dig into everything from classic soul to classic rock and modern pop to space- age lounge, both Austn and Johnny are accomplished emcees, and around western North Carolina, Johnny’s syrupy flow has become a thing of legend.

Over the past decade Free Radio has taken different forms, won multiple awards for “best hip-hop group” by local newspapers and shared the stage with heavyweights like Wu-Tang Clan, Ice Cube, Slick Rick, Nappy Roots, Digable Planets and Warren Haynes, and the band even swapped coasts for a few years when Johnny and Austn moved to San Francisco. But today, back home in Asheville, Free Radio has found its most powerful configuration with the addition of Grammy Award winning singer Debrissa McKinney and Datrian Johnson, whose deep, soulful vocals (think a modern day Barry White or Isaac Hayes) have enough power and authenticity to become the voice of a generation.

The addition of Debrissa and Datrian can not be overstated, “I feel like the universe put us together” says Johnny. “We all came from different walks of life and found ourselves in this time and space.” It’s the old adage where the whole is greater than the sum of its parts. “When Datrian and Debrissa come together it’s just magical” continues Austn. “One thing Johnny and I are not as skilled at is being vulnerable, and to have them bring that balance and soulfulness, to bring it back to a heartfelt level, I’ve been manifesting that for years.

It’s odd that Debrissa, who currently also plays sax and sings with Empire Strikes Brass and has recorded and played live with stalwarts like George Clinton, Gov’t Mule and Karl Denson’s Tiny Universe, as well as the children’s hip-hop band Secret Agent 23 Skidoo, for which she earned a Grammy, had the time to join Free Radio. She’s collaborated with them in the past and has been a huge fan for years, but it was only because Covid disrupted the world that she had the bandwidth to put her energy into Free Radio.

Datrian is the type of natural talent that stops you in your tracks. He was singing in church as soon as he could stand and by the time he was 12 found himself featured on BET’s “Bobby Jones Gospel.” He tasted the limelight singing at larger events like “400 Uhuru Rising – A Musical Journey To Freedom” and a premier for Aretha Franklin’s “Amazing Grace” film, but the dynamic of being in this band with these people is allowing Datrian to push himself in ways he never has. And that drive and that energy is opening windows for Free Radio’s music that simply didn’t exist before this lineup coalesced.

Together, as a quartet, they are creating cosmic Appalachian hip-hop that owes as much to Dead Prez and Tobe Nwigwe as it does the Mamas & the Papas. They are collaborating with other like minded Asheville artists including Saint Disruption which features John Medeski (Medeski Martin & Wood) and Jeff Firewalker, and with the help of mixer and producer Philo Reitzel, their first album as a unit strives to unite the heart with the head. They recognize these are dark days for many. Covid, lockdowns, financial stress and mental unrest, but it’s also a time of transformation and inspiration. We all face the dark, but some of us find the light. Do we tune out, dumb down and give in? Or do we rise up? Free Radio is shining that light in the darkest of days. Free Radio is holding out that hand to help us all rise up.

Datrian is the type of natural talent that stops you in your tracks. He was singing in church as soon as he could stand and by the time he was 12 found himself featured on BET’s “Bobby Jones Gospel.” He tasted the limelight singing at larger events like “400 Uhuru Rising – A Musical Journey To Freedom” and a premier for Aretha Franklin’s “Amazing Grace” film. Datrian has gigged around Asheville with his Oil & Water outfit but today is most focused on his work in local hip-hop band Free Radio which will deliver a new album, Earthworms, on May 27. Tickets-$12 reserved by table/$15 DOS