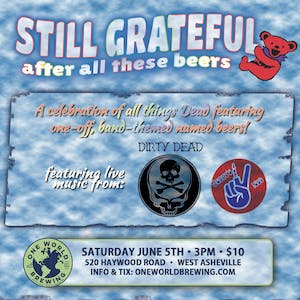 Yet their roots to the music that Jerry and the Dead fostered is palpable. Dirty Dead’s performances strive for the same energy of improvisation to ‘bring out their dead’ vibe.

The band is becoming known for its open, GD family vibe. They frequently welcome awesome talent to the stage to join the band for their epic sets. Since their first performance in September of 2016, the group has built a strong following.

Jerry’s Nub– Throughout the course of their musical union, the members of Jerry’s Nub have won over the hearts of music lovers from all walks of life. Performing at a variety of venues and making countless public appearances all the while recording new song versions, this talented Band has earned the admiration and affection of critics and fans alike.