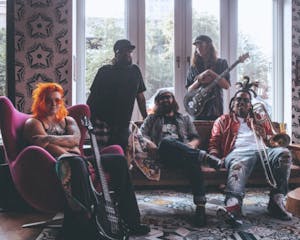 Funk’N Around is Asheville’s newest funk band featuring King Garfield on trombone. Garfield moved to Asheville recently from New Orleans to work for LEAF Global and knew he wanted to put together a band honoring the music of New Orleans that would turn heads and get people dancing. Also featuring Lenny Pettinelli from Empire Strikes Brass & Magenta Sunshine on keys, Datrian Johnson from Free Radio on vocals, Kayla Lynn from The Change on bass and vocals, Alex Bazemore on guitar, and Nik Hope also from Empire Strikes Band on drums, you will have a hard time staying in your seats for this funky power group.
November 17th they will be hosting a Night of Funk that will open up for a jam at the end of the evening. They will be celebrating the birthday of their manager and friend, Melissa McKinney. This is a night of funky music that you don’t want to miss.