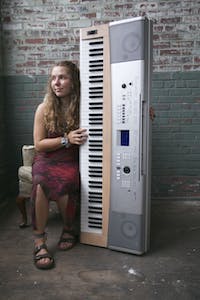 Hannah Ramsey is a pianist and vocalist based here in Asheville, NC. She has been involved in a collection of projects and musical groups, such as Jerry’s Nub, Gunslinging Parrots, Aimless Wave, and others. She is currently the keyboardist of the local Phish cover band, The Lumpy Heads, as well as the Greenville-based jam band, Fern. Hannah is thrilled to be performing her first solo gig at One World Brewing!

Music has followed Hannah all throughout her life. She began playing the piano at 3 years old and has always had a love for the stage. Her mom’s love for the Golden Age of musical theatre and all things Broadway rubbed off on her at quite an early age, inspiring Hannah to make any moment a performance when given an audience. During her high school years, she attended the Fine Arts Center in Greenville, SC as a student in the Jazz Studies and Voice departments. Here, she expanded her musical vocabulary both instrumentally and vocally and had the incredible opportunity to learn how to play in a combo/band setting with her fellow classmates. It was here where she met and befriended her future bandmates, and joined their group, Jerry’s Nub, when they were in search of a new keyboard player. Hannah’s experience with this young group expanded her improvisational skills and began to cultivate an even deeper relationship with music. Last summer, Jerry’s Nub evolved into a new project, Fern, and the band is beginning to explore music in a new way through songwriting.

Hannah has been involved in Asheville’s music community for almost two years. Her love for music is infectious and present any time she’s given the opportunity to perform. Hannah’s debut solo performance will include a pianistic take on a wide range of her favorite inspirations in the Great American Songbook and the rock world: Phish, Pink Floyd, Led Zeppelin, the Grateful Dead, and many others.”