Inside Out Stand Up Comedy Showcase 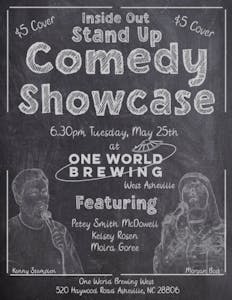 One World West presents the Inside Out Stand Up Comedy Showcase, a weekly standup show featuring performances by some of the best comedians in Asheville and the surrounding areas. Every week we feature live comedy on our outdoor stage from professional stand ups along with up-and-comers. No two shows will ever be the same! This week we have performances from Kelsey Rosen, Moira Goree, and Peter Smith-McDowell.

Moira is a queer comic from Asheville and her off the wall brand of hypervigilant humor deals with her experience as a trans-woman and other things people don’t understand.

Peter, also an Asheville native, has been traveling around the country telling jokes since 2009. He has opened up for Hannibal Buress, Trevor Noah, and Rory Scovel.