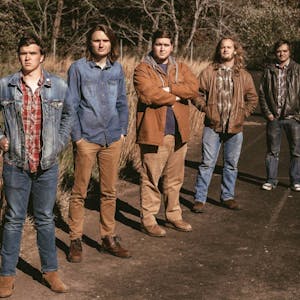 Formed in 2017 in the mountains of North Carolina, Jack Marion and The Pearl Snap Prophets bring the storytelling of folk music and mix it with the high-energy and recklessness of outlaw country. The band was born out of an idea between founding members Jack Marion (vocals/guitar), Chandler Bell (bass), and Marcus Clonts (drums) to make music reminiscent of their favorite artists (Johnny Cash, Turnpike Troubadours, American Aquarium, Tom Petty) and to create songs that they themselves would enjoy. The band then brought in members Owen Myers (Lead Guitar) and Matt Guard (Keyboard) to round out their sound. With their style of Country Rock, Jack Marion and The Pearl Snap Prophets keep audiences moving and never leave a crowd disappointed. Hard work and perseverance drives the band to continue to play shows across the state of North Carolina and reach audiences at every corner of the Old North State.
The band released their debut EP Devil and Me on August 24th, 2018 which was followed by 2019s When the Well Runs Dry, the bands full-length debut. For now they continue to run the roads, winning fans the hard way.
$5 cover