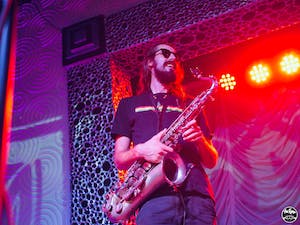 Jason Hazinski is a saxophonist & multi-instrumentalist from the Blue
Ridge Mountains of Western North Carolina. Saxophone and improvisation
have been his identity for 21 years, combining Blues & Soul with a
Reggae heartbeat. His original compositions and improv jams transport
you to the magical world that he’s always called home. Drawing from
the roots of the Ancient Appalachian mountainside, Jason produces
music that feeds the heart and heals the soul.

A passion that started in the 5th grade, saxophone instantly became
Jason’s locomotive in life. He began composing original music, forming
bands and performing professionally in high school. He has been
recording & releasing music with bands since 2009 and released his
debut solo album in Sept of 2021, titled “Land of the Sky”. This album
embodies the magic of Jason’s homeland, raw creation and love of
improvisation.

Jason performs his original music as a solo artist and is a primary
member of the Reggae bands Chalwa (Asheville, NC) and international
touring band TreeHouse! (Myrtle Beach, SC). He has shared the bill
with some of the greats, including: The Wailers, Steel Pulse, 311,
SOJA, Stick Figure, The Hip Abduction and many more.