Joey K and The Extra Double 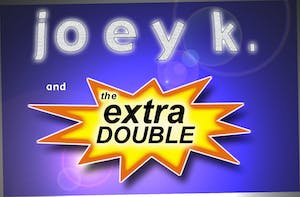 Joey K and the Extra Double is a ‘brand new band that’s been around for a long time. Joey K, Jim Arrendell, and Rob Geisler have been playing together since 2008, as founding members of one of Asheville’s finest private event bands, The Business. Now, for the first time, they are performing Joey K’s original music. Joey released his first album ‘Fifteen Year Overnight Success’ in 2011 and his second release ‘Ten Years a Broken Stage’ in 2019. When the pandemic hit in 2020, after more than a decade with a successful event band, Joey found himself with time to reflect on his musical aspirations and enlisted his long-time bandmates, some of Asheville’s best and most celebrated players, Jim and Rob to perform his original songs. Their years of playing together, exceptional musicianship, and instinctual musical connection is easily felt by audiences. Joey K and the Extra Double: It’s a rock band, it’s a funk band, it’s a blues band, it’s for everyone.