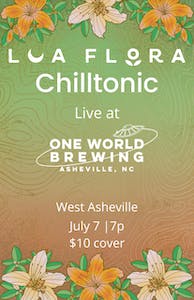 Lua Flora
Lua Flora is the soundtrack of your favorite daydream. The Asheville, NC-based group’s sun-kissed melodies are rooted in the harmonies of Appalachia, rhythms of the West Indies, and lyricism of American folk. Releasing a collection of singles, Lua Flora has collaborated with Sons of Paradise, Richard Vagner, Victor Rice, and Karl Vincent Roth (of Satsang). With stellar reviews from publications such as Face the Current and Top Shelf Music, the outfit has established its unique yet home-like voice.
​”The musical embodiment of Asheville’s creative spirit”
– Face The Current

Chilltonic
Based in Asheville, NC, the genre-fluid trio doles out groove-centric rhythms that are easy on the ears and melt the soul. An eclectic pastiche of sound influenced by pop, rock, hip hop, funk, and reggae — the engaging songwriting speaks to the human condition, and the hooks stick in the head for days on end. Chilltonic exudes a blend of progressive sounds hinted with a mysterious sense of nostalgia.