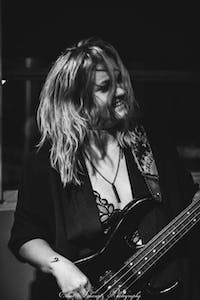 McKinney, formerly Kayla Lynn is a bass player, singer, songwriter, empowerment speaker, living in Asheville, NC. She is attending UNCA as a jazz performance major with a vocal minor. She has immersed herself in the funk music community in Asheville and become a regular at The Tuesday Night Funk Jam. Since moving to AVL, McKinney has played with the Alive After Five Concert Series with The Asheville All-Stars, was the bass player for the sold-out LIZZO/Talking Heads tribute with members of The Fritz, and performed with the Women who moved the Needle event sponsored by The Asheville Symphony. She has played with numerous bands throughout Asheville as well as with her own band at venues on the East Coast. K is a resident artist with LEAF Global Arts, an ambassador for Free2Luv, and a founding member of The One Voice Project. She released her debut solo album in 2021 entitled “Stay,” produced by Josh Blake at Echo Mountain. With K on bass and vocal, Thommy Knowles of the Fritz on keys, Derrick Johnson from Yo Mama’s Big Fat Booty Band on trombone, Alex Bradley of Empire Strikes Brass on trumpet, Isaac Hadden of IHP on guitar and backing vocals, and K’s drummer of 13 years Aryan Graham on drums, the 4 song EP is young, fresh, and fun. K is now also co-fronting Asheville’s newest band Funk’N Around, a New Orleans based funk band with King Garfield