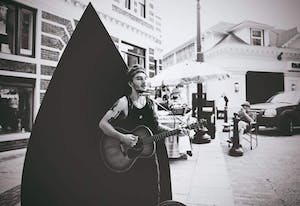 Nick Colavito & Friends will be putting on an especially jammy show celebrating Jerry Garcia’s Birthday!  This show will feature a bass player, guitar player, mandolin, and Nick on guitar and vocals.

Bio: Born and Raised in North New Jersey along the Appalachian, Nicholas became intrigued with music at a very young age. Growing up listening to the classics like The Rolling Stones, Ray Charles, Aretha Franklin, doc Watson, etc. his musical pallet just expanded with age. He now resides in North Carolina where his style Ranges now from Piedmont blues, Old-Time clawhammer banjo, bluegrass Flat picking, or soul. Picking up the guitar, which was his first instrument, at the age of 13, Nick learned with no formal lessons. He learned just by listening and playing a long to his favorite songs. As the years went on, Nick took on learning music theory to really hone in on his craft. He learned how to play the banjo, harmonica, ukulele, drums, Didgeridoo and bass all before the age of 20.
Nick has been writing poetry since a very young age, so once his musicianship was up to par, songwriting fell into his lap naturally, as if it was a language he already knew how to speak.
He released his First 7 Song EP in 2017. He latest release “Perspective” was in 2019 and is Available on all streaming sites like Spotify, Soundcloud, Itunes, Youtube, Amazon music, and bandcamp.