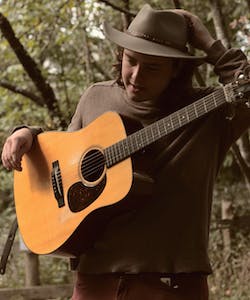 Hailing from Central Pennsylvania,  Noah G. Fowler is a singer-songwriter, Guitarist, and Bassist in Nashville, Tennessee. He is a constant traveler and troubadour playing listening rooms and honky tonks across the nation. His songwriting is folkloric, drawing heavily from Appalachian and Celtic storytelling traditions as well as the 60’s folk revival and many of Texas’s storytelling songwriters – Willie Nelson, Guy Clark, Townes, Steve Earle – yet it fits comfortably in the context of his generation of songwriters and musicians. Musically, he crosses the line over Bluegrass and Country & Western in similar ways as Vince Gill, Jim Lauderdale or Mary Stuart. In his career so far, Fowler has played notable venues like the historic Club Passim, The Jalopy Theater, Kung-Fu Necktie, Isis Music Hall, The River House, The Grove, The Englewood, The American Legion Post 82 Nashville, and has shared the stage with acts like Noel Mckay, Angela Autumn, Darrin Hacqard, Low-Water Bridgeband, Town Mountain, and Palmyra.