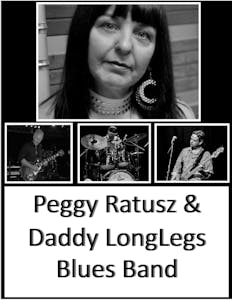 Austin, Texas transplant, Peggy Ratusz, has been pulling from the cream of the Asheville music crop since moving here in 2002. This “ruby throated” chanteuse has been a finalist in the Blues Foundation’s International Blues Challenge 2008, 2010 and 2016. For seven consecutive years, she’s won Best in Blues in WNC’s “Best of” reader’s poll. In 2016, she won in 3 categories: Best Vocalist, Best in Blues and Artist Who Gives Back. She’s opened for Tedeschi-Trucks Band, Geoff Atchison, Taj Mahal and the Beach Boys. Peggy Ratusz & Daddy LongLegs is a dynamite band that sets the Blues on fire – from slow ember to full alarm! Kelly Jones on guitar and vocals, Jon Price on electric bass and Jay Hoots on drums!
www.reverbnation.com/peggyratusz