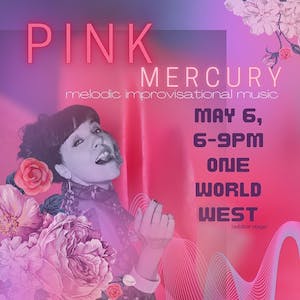 Hey Asheville – it’s Stephanie Morgan, formerly of Asheville indie pop band stephaniesid, now splitting time between here and Los Angeles. I have missed youuuu!
Can’t wait to see you again at One World West, where I’m bringing my favorite thing ever: Pink Mercury, an all-improvised pop/rock project I now organize in both cities. The evening’s players are heavy hitters and tuned-in people. You know ’em you love ’em: Ryan Oslance, Mike Savino, Merrick Noyes, Mike Johnson, Jack Victor, maybe one or two others?
Things to know:
1) The live show starts from zero. All improvised. As stated, it usually tends indie pop/rock-ish.
2) Feel free to dance to sit or be a wallflower. We just hope to be your groovy companion in a profoundly tricky world.
3) We’re not a traditional jam band. We play around with verses and choruses if they present themselves. Lyrics might or might not be intelligible. We’re mining here,
people.
4) Yes, the band was named for Pink Floyd + my mercurial moods.
5) I am nervous to be back on stage.
Here goes. See you on May 6, my friends.
Steph

After Show indoors by Night Teacher…

Based in the Blue Ridge Mountains of Virginia, Night Teacher is a collaboration between poet and composer Lilly Bechtel, and multi-instrumentalist and producer Matt Wyatt. Braiding elements of traditional folk with electro-pop, blues-rock, and Afro-Cuban rhythm, Night Teacher’s songs reflect the work of two musicians who lean into each other with a willingness to be changed by what they hear. Music writer Robb Donker writes of the single in American Pancake: “Wyatt’s percussive tones sort of feel like they are improvised (whether they are or not), as if the duo found things around the house to play, which is what (for me) persists in making their texture so organic and interesting… Bechtel’s vocal aesthetic works perfectly as a storyteller; there is at once a sage presence in her powerful lilt, but it is also one that feels broken- as hopelessness and hope play a fierce game of tug of war.” Since the 2020 release of their debut record Night Teacher, the duo has won the Music With a Conscience Series, been featured on Women of Substance Radio, and noted by the music magazine Relix as an “artist to pay attention to.”