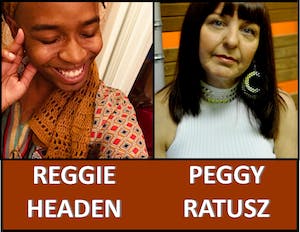 For this concert, their musical landscape will be cultivated by skillful arbitrators: Jonathan Pearlman on guitar, Paul Banman on keys, Connor Law on bass and Justin Watt on drums.

Reggie Headen is a native North Carolinian and graduate of the American Musical and Dramatic Academy in NYC. He sees the stage as a medium of many possibilities to connect and engage an audience. He started his professional career as a featured performer at New York’s famous Broadway concert venue Town Hall, playing to giants and peers in the industry. In fall 2018, Reggie moved to Asheville and since moving he’s had what he calls “A Return to Jazz”.

Though recently around town, he can be heard singing anything from Aretha Franklin to Jefferson Airplane. The power and panache of his live performances are ones for the history books. Headen beguiles and astounds. A fearless performer and heartfelt old soul vocalist.

Blues/Jazz/Swing/ Old School Soul/R&B chanteuse Peggy Ratusz has been performing for nearly 45 years; the last 17, in WNC. Her versatility, range, depth and soul filled sincerity create a cyclical experience for audiences large and small. From cover tunes to originals, the scope of nostalgic to modern stylings she chooses to deliver

effectively evokes the groove and embodies the lyrical content, setting her apart from other great vocalists. For the past fifteen years, she’s either won or placed in the Western North Carolina Readers poll for Best in Blues. In 2016, she was named Best Vocalist as well as the area’s most noted musician who gives back to the community.