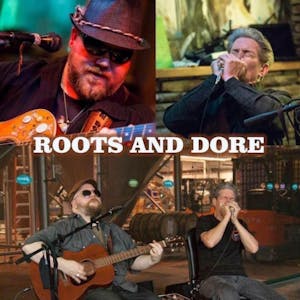 Roots and Dore are an American blues, soul and roots duo from the music-rich mountains of Asheville, North Carolina. They are currently among the busiest performing acts in the southeastern US. Having played 150-200 shows annually for the past ten years. They quickly building a name for themselves, opening for national acts, playing festivals nationally and internationally and their original music is being played on dozens of radio stations, locally and around the world. Roots and Dore just released their new album The Blues and Beyond to a wave of awesome reviews. (Featuring special guest appearances by “Steady Rolling” Bob Margolin of Muddy Waters Band, along with Doc Watson’s partner and multiple Grammy winner David Holt and Tony Black, the bass player for Marshall Tucker Band.) Always a good time had by everyone when RDB are doing their thing for for folks at shows.