The Emily Musolino Band & The Sifted 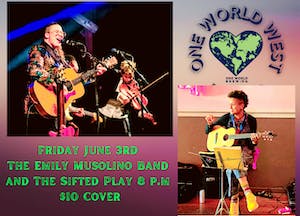 Emily Musolino Band: Emily Musolino is a Durham, NC native who mixes soulful vocals with shredding blues rock guitar riffs and a little outlaw country twang. Her influences range from Brittany Howard to Fleetwood Mac to Stevie Ray Vaughan. The depth of emotion in her voice is stunning and her songs have a classic sound and lyrics that tell compelling stories.

A Berklee College of Music graduate, Emily has opened for and collaborated with artists like Ani Difranco, Nikki Hill, Vinx, Shana Tucker, and Charly Lowry of Dark Water Rising. She is also owner and head engineer at Blue Moose Recording Studio in Durham. Emily released her newest album “The Vault” in April 2018.
Emily has been featured several times on NPR’s the State of Things with Frank Stasio and written up in the News and Observer. She currently fronts the Emily Musolino Band and plays 200+ shows a year, both bandleader and soloist around the world.
Durtee Daze: The Sifted (as a trio) is Kasey Horton (Kasey Horton Music), Michael Tao (Dreads for Brains) and percussionist’s new project based out of Asheville NC. Their music and lyrics are written by Kasey and Michael Tao has crafted arrangements with select instruments. Instrumentation includes Vocals, Guitar, Bass, and Percussion, and occasionally cello (Franklin Keel).
Kasey Horton Bio:
Kasey Horton was born and raised in North Carolina. She is a professional recording and touring artist with various local bands around NC, with her main projects being the violist for Amelia’s Mechanics, Emily Stewart and Vaughn Aed.