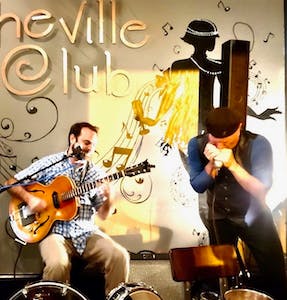 Asheville duo The Jukebox Jumpers use piedmont and delta blues traditions as their main source of inspiration, from which their performances expand into classic southern soul from Memphis, Muscle Shoals and New Orleans, as well as Chicago blues and early rock n’ roll. Additionally, they write original songs inspired by mining those deep musical veins. Parrish Ellis simultaneously sings and plays guitar/bass parts while playing two drums with his feet. Most of the time he is joined by Steve Trismen on fiddle, and sometimes by Jim Aaron or Patrick Lockett on harmonica.

Within one set of music you will hear songs by such American musical icons as James Brown, Ray Charles, Otis Redding, Bo Diddley, Earl King, Taj Mahal, Chuck Berry, Dr. John, Charley Patton, Lee Dorsey, Sonny Boy Williamson, Mississippi John Hurt, Alvin Robinson, RL Burnside, Robert Johnson, Blind Arthur Blake, and Little Walter. And when they slip one of the original compositions into the mix, it’s difficult for the audience to tell the difference. At the core of this carefully curated musical mix is the common thread of the high energy, funky good-time party and dance music that originally arose from barrel houses and juke joints in the American south during the 1920s through the 1960s.