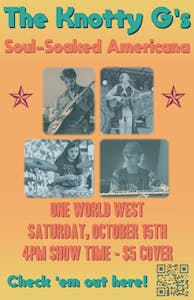 This is a Full Band performance on the outside stage with Daniel Combs & Marcus Clonts from 4pm-7pm. One World Brewing Food Truck OPEN.

The Knotty G’s goal is simple: to create music and an experience they feel is genuine. Gritty yet funky performances fuse with the band’s jovial nature and invite audiences to take part in the revelatory power of music while still managing to tap into the fun that can sometimes be overlooked in day-to-day life. Though The Knotty G’s are known to approach genres in unconventional ways, doing so with great intention takes their soul-soaked mountain music to a special and reverent place, a genuine place, and a place where by the end of the show, you feel as though you’ve reconnected with some old friends.

In the short time they’ve been a team, they have amassed an impressive list of stages and festivals, including: the Bonnaroo Music and Arts Festival, The Blue Ridge Pride Festival, Strangecreek Campout, Wormtown Music Festival, and The Ladybug Festival.

In 2019, The Knotty G’s released their first album, One Small Glove, which encompassed the Americana roots they have in their music and in true Knotty fashion, the joking flair that accompanies their performances.

In December 2021, they released “Set Sail,” their first full length studio album recorded with GRAMMY winning producer Matt Williams (Travers Brothership, The Get Right Band, Tall Tall Trees, Jonathan Scales) at The Eagle Room located just outside of Asheville. The album showcases genre jumping compositions tied together with the same singular soul-soaked thread that weaves it’s way through all of their music.

Check out the new album at https://linktr.ee/theknottygs