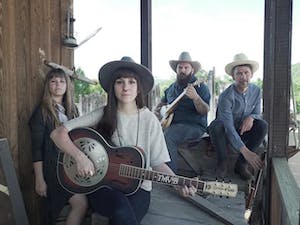 Hailing from North Carolina, two sisters and friends of the Maggie Valley band came together in the town they now identify themselves with. Each member learned their trade of music in the beautiful mountains of Maggie Valley, NC. Sisters Whitney & Caroline Miller grew up in a home where playing the piano was a daily requirement. Daily requirements turned to passion as they hit the streets to street busk. After years of busking, The Maggie Valley Band was officially formed and decided to take it inside-to venues. TMVB released their album “The Hardest Thing” in 2018 under under the direction of Grammy & Emmy nominated producer, David Mayfield. TMVB comes together to produce a sound affectionately referred to as “Dark Appalachian”.