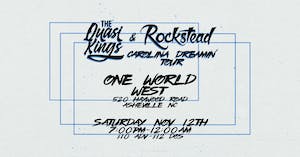 The Quasi Kings & Asheville’s own Rockstead are headed to One World West for a night of music & good times.

Formed in Columbus, OH in the Spring of 2016, the The Quasi Kings have quickly “cemented [their] place as the sprawling, multi-instrumental next generation of Columbus reggae.” (Columbus Dispatch). The band, led by brothers Zach (vocals, saxophone, percussion) & Benny Coleman (vocals, bass), varies in age, musical backgrounds, and taste, leading to a worldly & distinctive collage. Their premier offering, 2018’s Throwaway Culture EP, features catchy hooks, tight vocal harmonies, and a unique blend of reggae, rock, and hip-hop. Their latest album, Eye of the Storm, takes things a step further with songs like “Booze”, a raucous Sabbath inspired tune, and the dubby, horn driven “Cut It Out”. Their live shows are high energy, captivating and ever-evolving. The Quasi Kings have had the privilege to play with the likes of Dirty Heads, Steel Pulse, Badfish, Fortunate Youth, Third World, Israel Vibration, The Werks, Dark Star Orchestra, Tropidelic, and more. Visit thequasikings.com for tour dates & more info.
listen.thequasikings.com/bio
Facebook.com/thequasikings
Instagram: @thequasikings

The feeling of love. The power of unity. The essence of happiness. The strength of togetherness and positive vibrations. The highs of living life and the lows of dealing with its obstacles. All of these things encapsulate the music of Cincinnati, OH-based Rockstead, a five-piece, passion driven rock/reggae group.
With roots leading as far back as middle school, Rockstead combines a lifetime full of influences ranging from rock, punk, reggae, jam and metal. In their early days Rockstead ruled the college party scene in Ohio with a schedule full of impromptu house shows that led to packed basements of DIY venues and later, massive crowds attending college fests such as Ohio University’s infamous spring festivals. This early success catalyzed the debut of their first album “Wake Up and Live” (2013) shortly followed by their popular self-recorded “Rise” EP (2014). These releases ignited their inner road warrior leading to a plethora of plays at music festivals and concert venues across the Midwest. Since then, Rockstead continues to widen their reach touring throughout the Eastern U.S. and down into Florida.

Though member changes have occurred over the years, front man singer/guitarist Jake Burns continues to drive the group forward as they have shared stages with international touring acts such as The Wailers (Jamaica), Sticky Fingers (Australia) and Big Mountain (U.S.A.) as well as many staple East coast reggae acts like Giant Panda Guerilla Dub Squad, Badfish, Tropidelic, Bumpin’ Uglies and Ballyhoo!. The band has now grown to include Nate Anuci (drums) and Jacob Riley (lead guitar). With a healthy gap since their last full release (Homegrown, 2016) Rockstead dropped their first studio album “You’re In Control” in September 2020 which scored them multiple features in blogs and podcasts across the scene making them “one of the most unique and special bands in [Cincinnati]” (CincyMusic, 2020).