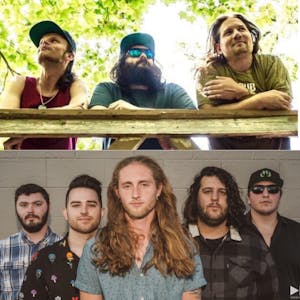 For seven years, TreeHouse! (Myrtle Beach, SC) has spent the majority of their days blazing sprawls of highway and their nights playing an unapologetic enthusiastic blend of psychedelic reggae jam rock they are known for in venues across the nation.

TreeHouse! songs resonate in your soul with lyrics of rising above adversity, the power of gratitude, and the importance of unity. For every setback, there’s a step up waiting for you, if you keep your focus. For every day, there’s a blessing to count and for every event, we must recognize we are a part of it all. It’s this kind of message that makes the most recent studio album, Full Immersion, their strongest release to date.

In 2010, singer/guitarist Jeremy Anderson and drummer Trey Moody formed the foundation of American Reggae Jam Rock band TreeHouse! With a vision and a dream, they jumped into a van to travel the country and share their good vibes. Along the way they picked up fellow band member, Joe Harley on Keyboards/Synth/Theramin/Backing Vocals.

Throughout the years, the band has collaborated with other up and coming artists in the genre including Sun-Dried Vibes, Oogee Wawa, Roots of a Rebellion, James Begin of Tropidelic, Nick Sefakis of Iya Terra, Dan Kelly of Fortunate Youth, and others, all the while discovering a like minded community across the East coast and beyond.

After teaming up with musical inspirations like Steel Pulse, 311, The Wailers, Dirty Heads, Pepper, Stick Figure, and SOJA along their journey and in the spirit of the bands who laid the road before them, these road warriors continue to spread their roots coast to coast.

The TreeHouse! single, “Blessings” was picked by Stephen Marley and Ky-Mani Marley as one of the top 10 songs out of hundreds of contestants in the Marley’s Music Uprising, because they felt this song exemplified the spirit of Bob Marley.

“The live show itself heals me every night. I write these songs, to some extent, for my own sake. If I am to sing this song every night, I try to make it beneficial for my own being and implant within it a message that I may need to hear, myself, for reassurance in my journey. Whenever we are feeling overwhelmed with our path, someone comes like a messenger from the universe and feels the need to express how much we’ve affected their life for the better, just by doing what we do. That’s what always keeps us going.”

The feeling of love. The power of unity. The essence of happiness. The strength of togetherness and positive vibrations. The highs of living life and the lows of dealing with its obstacles. All of these things encapsulate the music of Cincinnati, OH-based Rockstead, a four-piece, passion driven rock/reggae group.

With roots leading as far back as middle school, Rockstead combines a lifetime full of influences ranging from rock, punk, reggae, jam and even metal. In their early days Rockstead ruled the college party scene in Ohio with a schedule full of impromptu house shows that led to packed, sweaty basements of DIY venues and later, massive crowds attending college fests such as Ohio University’s infamous spring festivals. This early success catalyzed the debut of their first album “Wake Up and Live” (2013) shortly followed by their popular self-recorded “Rise” EP (2014). These releases ignited their inner road warrior leading to a plethora of plays at music festivals and concert venues across the Midwest. Since then, Rockstead continues to widen their reach touring throughout the Eastern U.S. and down into Florida.

Though member changes have occurred over the years, front man singer/guitarist Jake Burns continues to drive the group forward as they have shared stages with international acts such as The Wailers (Jamaica) and Sticky Fingers (Australia) as well as many staple East coast reggae acts like Giant Panda Guerilla Dub Squad, Badfish, and Ballyhoo!. The band has now grown to include Nate Anuci (drums), Jacob Riley (lead guitar), Nick Yinger (auxiliary percussion), and Alex Kessis (bass). With a healthy gap since their last full release (Homegrown, 2016) Rockstead dropped their first studio album “You’re In Control” in September 2020 which scored them multiple features in blogs and podcasts across the scene. By using their relentless high-energy performances and genre-bending set lists while aligning their unwavering dedication to the do-it-yourself work ethic, Rockstead shows no sign of slowing down their mission of bringing people together through music.