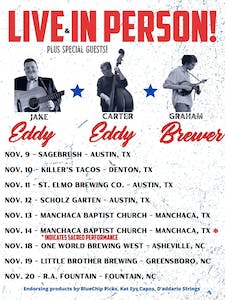 Jake Eddy is a West Virginia-native bluegrass guitarist currently touring out of Nashville. His recent self-titled album featuring Bryan Sutton, Rob Ickes, Kenny Smith, and more peaked at #4 on the airplay direct album chart. He also tours full-time with the Becky Buller Band, Becky is a 10-time IBMA award winner and has been involved in 5+ Grammy nominated/winning projects.

He will be playing in a trio configuration with an upright bassist (Carter Eddy) and mandolin player (Grahm Brewer).