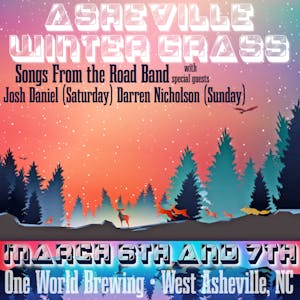 On Saturday, March 6th, Josh Daniel (Josh Daniel’s Grateful Band) will join us for our entire set! Josh Daniel is a North Carolina singer-songwriter and multi-instrumentalist whose passion and enthusiasm are evident every time he takes the stage. Blending rock n roll with bluegrass, funk and soul music with a reggae backbeat, you never know which way he will lead the crowd.
Josh has performed at many national events (MerleFest, FloydFest, Bristol Rhythm & Roots) and along the way has had the privilege of sharing the stage with some legendary musicians like his friend John Cowan (Doobie Brothers) as well as some monsters of bluegrass (Sam Bush, Ronnie McCoury, Danny Barnes, Mike Marshall).
Daniel’s solo live shows consist of his dynamic vocal range and acoustic skills along with a Digitech looper pedal that allows his improvisational mind to create a unique one-man-band that is like no other. When the COVID-19 pandemic hit last year, Josh pivoted effortlessly to produce a long-running daily livestream, his Quarantine Sessions – bringing fans together during these unprecedented times.
On Sunday, March 7th, Darren Nicholson Music will join us for our entire set! Darren is a bluegrass and Americana musician based in Haywood County, here in the mountains of western North Carolina. A Grammy nominee and a recipient of multiple International Bluegrass Music Association Awards, Darren has appeared countless times on WSM’s Grand Ole Opry, at the Ryman Auditorium, CMT, GAC, and many of the world’s most famous venues and networks. As a full-time, founding member of Balsam Range, Darren has played on 40 #1 songs, held the #1 spot on Billboard’s bluegrass chart, and been awarded North Carolina’s highest honor, the Order of the Long Leaf Pine.
Darren is also renowned as a solo artist, session musician, and songwriter, and is involved in all sorts of collaborative efforts each year. Darren has stayed busy throughout the COVID-19 pandemic, releasing three singles, performing live streams, and working on a new solo recording.
Both these musicians are frequent songwriting collaborators with Charles and the band – but we have never played full sets with Josh or Darren like we will do next weekend at Asheville Winter Grass!

Umami Mami Food Truck will be at both shows.

Saturday Showtime is 4 pm and Sunday showtime is 3pm. This is an OUTDOOR Socially distanced event. All CDC safety precautions will be in place. Seating is reserved in advance. There will be craft beer and food truck available. Don’t delay tickets are limited!

Known across western North Carolina and beyond for their spirited performances, Asheville acoustic supergroup Songs From the Road Band promises a thrilling afternoon of music on Saturday & Sunday March 6th & 7th Saturday, postponed from January 9th.

As a founding member of the influential newgrass band Acoustic Syndicate, Steve “Big Daddy” McMurry has penned songs for nine albums and performed coast to coast – at events like Bonnaroo, Telluride Bluegrass Festival, MerleFest, Farm Aid, and many more. He has also fronted popular side projects, such as Big Daddy Bluegrass Band and Big Blue. A sixth generation farmer from Cleveland County, McMurry continues to dig into his heritage of music and farming.

Located on Haywood Road in West Asheville and easily accessible from I-26, One World Brewing West is the perfect setting to enjoy live music safely.

Asheville Winter Grass takes place outdoors with spaced-out tables and plenty of room for distancing. Concert-goers are encouraged to dress accordingly, though outdoor heaters will be provided. A food truck will be on hand for the proceedings. One World follows all COVID-19 precautions to ensure everyone’s safety while enjoying the show.

Though the weather may be chilly, the music at Asheville Winter Grass will be anything but. “This show is high-energy and full of fiery pickin’,” says Humphrey. Fans can expect a diverse set of McMurry’s original songs – alongside those from Songs From the Road Band, whose latest single “Molasses” is currently climbing the Bluegrass Today Grassicana charts. “We’ll also be including some fan favorite cover songs,” concludes Humphrey, “and we hope to see you on Saturday, January 9th!”