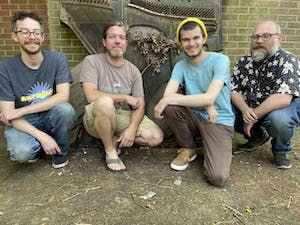 Auragami is a four piece eclectic rock jam band based in Greenville, SC. Auragami surely have made a name for themselves in the foothills of the Appalachians with their catchy melodies, tight arrangements, endless jams and smooth vocal harmonies, the band seems to defy being pinned down to any one genre like any good jam band should. Their current lineup is Joshua Tessier on guitar and vocals, Jonathan Coblentz on keys and bg vocals, Evan Hamlin on bass and bg vocals, and most recently Jason Newton on drums. They frequently play shows all around Upstate South Carolina and Western NC. June of 2022 was a milestone month for Auragami when they released their debut studio album “House of Love”, a 5 song ep that showcases the many sides and sounds of this group. 2022 promises to be the biggest year yet for Auragami that started with a play at the Gem & Jam Festival in Tucson, Arizona and is continuing to get even better with an album under their belt and many more shows to play! Check em out at www.auragamiband.com