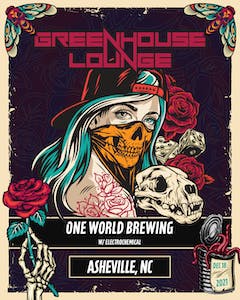 Greenhouse Lounge (GHL): is an electronic musical trio that combines the remix element of a DJ, soulful rock guitar leads, warm analog bass and live drums/percussion. Their music can be described as euphoric; a hypnotic groove with tightly woven soundscapes that are rich in melody andtexture. Consisting of members Dave McSweeney (Bass) and Ray Felts (Drums), these musicians have cultivated a sound and following that is truly their own. First performing at local venues around town in Jacksonville, the band started to form a grassroots fan base and soon received their first festival plays from Trinumeral and Bear Creek Music Festival. Shortly after, they would be performing from city to city regionally in Florida and other states alike. Supporting national acts in Florida such as Pretty Lights and Big Gigantic helped establish the group as a mainstay in their home state. Also, hitting the road with bands like The Malah, Zoogma and Boombox helped expose them to the rest of the southeast. From there, the group’s sound only spread further up the coast towards the Virginias and eventually into the tri-state area. Throughout 5 years of touring and making appearances at festivals like Suwannee Hulaween, Sonic Bloom, Bear Creek, Aura, Rombello, Catskill Chill, Camp Bisco, Wakarusa and Camp Barefoot the band has made waves all over the map. With an album and an EP under their belt, “Freakout//Now Reflect” and “The Other Side”, the group plans to release more music, as well as stretch their network and market to the reaches of California and further. Greenhouse Lounge is without doubt a unique experience and mostimportantly a good time. Never straying to far from the groove, they are steadfast for the future and ready to go.

ElectroChemical is unhinged psychedelic progtronica spawned from the inner minds of Will Davis (bass/production) and Collin Fradenburg (drums). Residing in Asheville, North Carolina, ElectroChemical has been constructing songs since 2011. Soup Williamson of Life is Art Studios, an integral new addition to the band, is offering unparalleled visual graphics directly on stage as the third member of this fast rising group. High energy performances, creative collaborations and thought provoking music are all things guaranteed at any ElectroChemical show.

ElectroChemical is quickly gaining recognition for their unique ability to excite fans across a variety of genres including the electronic, jam, & experimental scenes. The band has been developing an enthusiastic and loyal fan base throughout 2014 and have been seen at an assortment of shows including Soulshine Farm Fest, opening for Phutureprimitive, Thriftworks, Consider the Source, The Mantras, & performing at Alex Grey’s 4th Annual Visionary Arts Fair.

ElectroChemical provides self produced backing tracks that weave modern and ancient tones while filling the sound waves with uncommon live bass and drum melodies. Creating music that is consciously driven and focuses on their unique bass-drum dynamic, the listener is encouraged to venture inward while simultaneously finding connections within the world around. Traveling through technological and organic musical dichotomies, audiences are encouraged to suspend their previous beliefs of music. Whether listening to their their CD entitled Oscillations (released in 2013) or dancing feverishly at one of their live shows, fans are inspired to create their own reality while listening to genres not previously defined.