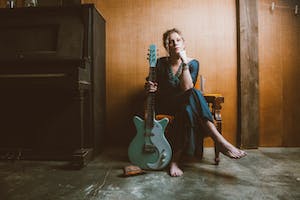 “I don’t know if you believe in this crap,” says singer/songwriter lund, who recently had her tarot read. “But I drew the Hermit card, representing exploration and personal growth. He’s shining a light: Come on out of the shadows!” After a decade in the music business on the management and booking sides, the classically trained singer has finally moved toward the light. “It was time.”

lund’s musical journey actually started with a Music Industries Studies degree — with a concentration in vocal performance — from Appalachian State University. Suffice to say, she “knows her shit.” “My voice professor was an opera singer,” says lund with a grin. “I sang every spiritual I could to avoid opera.” Her passion and training are evident on the Nina Simone-derived psych-soul of “Don’t You Leave Me,” the grungy swirl of “Paper Tiger,” and her subtle self-harmonizing on the title track. On this eclectic stroll through American musical styles, lund’s clarion voice is the tie that binds.

In the summer of 2020, with the pandemic on the rise and an album’s worth of rock solid material in the tank, she realized how she could optimize her quarantine. The tricky dance of socially distanced recording was well worth it. “I always felt like a late bloomer in life,” she reflects. “But now I know it’s all about timing.”