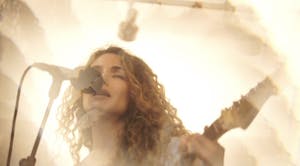 Based in the Blue Ridge Mountains of Virginia, Night Teacher is a collaboration between poet and composer Lilly Bechtel, and multi-instrumentalist and producer Matt Wyatt. Braiding elements of traditional folk with electro-pop, blues-rock, and Afro-Cuban rhythm, Night Teacher’s songs reflect the work of two musicians who lean into each other with a willingness to be changed by what they hear. Music writer Robb Donker writes of the single in American Pancake: “Wyatt’s percussive tones sort of feel like they are improvised (whether they are or not), as if the duo found things around the house to play, which is what (for me) persists in making their texture so organic and interesting… Bechtel’s vocal aesthetic works perfectly as a storyteller; there is at once a sage presence in her powerful lilt, but it is also one that feels broken- as hopelessness and hope play a fierce game of tug of war.” Since the 2020 release of their debut record Night Teacher, the duo has won the Music With a Conscience Series, been featured on Women of Substance Radio, and noted by the music magazine Relix as an “artist to pay attention to.”