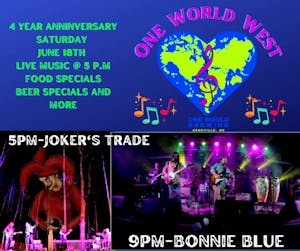 We LOVE what we do and are so glad we opened our 2nd location in West Asheville 4 years ago. We heartfully thank you for all of your support. We will be celebrating with a day of live music and beer specials. $10 cover
Bonnie Blue is a Southern Rock Jam Band from Jacksonville, Florida. The group has been taking the scene by storm with their infectious and organic live act full of originals with some choice covers. Bonnie Blue’s sound will resonate with fans of Widespread Panic, Gov’t Mule, The Allman Brothers, The Band and Grateful Dead.

Bonnie Blue’s creative style, while paying homage to their collective influences, ushers in a fresh take on Southern Rock ’n Roll. Bonnie Blue hopes that their passion for music, authenticity and equality will be felt by anyone who’s ever experienced the power and love found in music. Bonnie Blue has had the honor of playing gigs alongside legends like Butch Trucks (Allman Brothers Band), John Popper (Blues Traveler) and Bobby Lee Rodgers. They can also be found jamming out at major music festivals including Wanee, Magnolia Fest and Suwannee Rising.

They released their debut studio album, “No Looking’ Back” June 2017.
“The guitars are rockin’, the vocals are powerful, the keyboards up front and personal, and the rhythm section kills from start to finish. This album is so evocative of the great Capricorn tradition: the Allman Brothers Band, Eric Quincy Tate, Elvin Bishop, Hydra, the Marshall Tucker Band, Wet Willie and more…Can they produce this in concert? You’re damn skippy. This is a fine band both in the studio and live on stage.” – MusicFestNews

Local jam band Joker’s Trade will be opening the night.