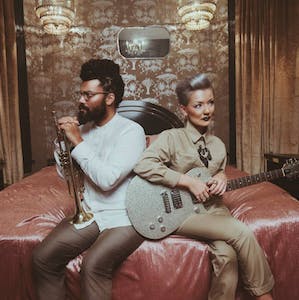 Nashville-based group Oracle Blue blends elements of Neo-Soul, electronic
music and #BAM (Black American Music) to create a newfangled soundscape with a sullen danceability. The group is fronted by producer Liz Kelley on guitar and effected vocals, supported by playback engineer Zach Douglas on trumpet and electronic sampling, and rounded out by a rotating cast in the rhythm section. Influences include artists ranging from Hiatus Kaiyote to Sylvan Esso, while creating a sonic culture that is uniquely their own.

The group began as a student jazz combo that met for class credit at Coastal
Carolina University. During their time as students, the group received a DownBeat
Student Music Award, shared the stage with artists Victor Wooten (Bela Fleck and
the Flecktones), Jeff Coffin (The Dave Matthews Band), and often worked with SteveBailey (Bass Department Chair, Berklee School of Music). In the summer of 2016 this group performed at Montreux, Umbria and Vienne jazz festivals in Europe.
Now performing and creating full-time, the group has released their debut
album Gilded Kingdoms, which included several original tracks, as well as
reimaginings of jazz standards “Don’t Explain” (Billie Holiday) and “On Green
Dolphin Street” (Kaper). Bandleaders Douglas and Kelley self-manage and produce the band’s music, hiring various members for the rhythm section. Since 2018, they have held a residency and Nashville jazz club Rudy’s, and have toured between 26-48 weeks out of the year. Between the group’s improvisational jazz background
and a varying talent pool behind them, this creates a unique experience for every
performance.

Occasions of note include multiple opening performances for five-time
GRAMMY Award winning artist Lalah Hathaway, endorsements from Traveler
Guitar and Aston Microphones, a performance at NAMM, and a recent listing on DownBeat’s “What to Stream This Week”. The group has spent recent months collaborating on music with producer Justin Trout and bassist MonoNeon (Prince, Mac Miller, Ne-Yo), which released in spring of 2021