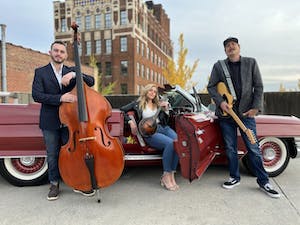 With equal parts swag and sophistication, acoustic R&B mashup outfit Pimps of Pompe are built on the power of 90s hits and a passionate devotion to undeniable groove. With a mission to deliver a live show that entertains all ages, where your grandma Louise snaps her fingers while your millennial cousin snaps a selfie, the Pimps adapt familiar hits from the golden age of hip-hop to an eclectic string band format. Providing fresh takes on old favorites is the driving ethos behind bandleader Cynthia McDermott’s development of this classy, sassy blend — “I got tired of thinking I had to
make a choice between old and new, or jazz and hip-hop. These arrangements give me everything I want; the bold, sexy swagger of modern rap and R&B, combined with the sultry, romantic moods that jazz evokes.”

Featuring mandolin, guitar, and upright bass pumping out “la pompe,” the rhythmic technique developed by hot jazz guitar players in the absence of a drum kit, the Pimps pay homage to their selections from the vintage jazz, bossa nova, pop, hip-hop and R&B schools while infusing a fresh and lively resonance all their own.

McDermott’s love of jazz harmonies and respect for rhythm and groove drive her arrangements to be lush, colorful and danceable. At the end of the day, the band strives to have fun, be themselves, and do a really good job at whatever crazy combo they attempt, whether it’s rapping Big Poppa over a samba groove or turning Ginuwine’s Pony into a gypsy jazz waltz. Invention, exuberance, integration — this is what it means to pimp the pompe. The band celebrates their 3 year anniversary this year, and have asserted themselves as a must-see act in the region. The Pimps can be found weekly at several local favorite
venues such as The Foundry Hotel Lounge, The Lobster Trap, and Battery Park Book Exchange.