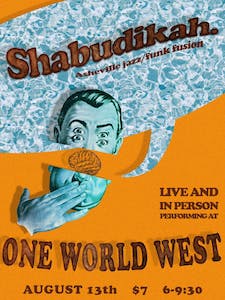 Lucky you Shabudikah makes their return to One World West on Friday August 13th 6-9:30! Tickets are $7 at the door.

Shabudikah began in 2017 with one goal, to make the booty shake. Drawing influences from a vast variety of artists, such as Steely Dan, Chicago, Miles Davis, Snarky Puppy and more, Shabudikah continues to find new ways to expound upon the traditional funk idiom, while adding their own unique personal twists into the mix. Shabudikah epitomizes everything your significant other loves about music, and what your grumpy uncle simply tolerates.

The six-piece funk/soul group began as a collaborative effort among members keyboardist Nate Sly, guitarist Reid Parler and trombonist Justice Mann, who recorded the band’s 2019 commercial debut, “Snack Pack”. While the band’s repertoire has expanded well beyond songs off the album, more recent additions of trumpeter Patrick Allison, bassist Hinton Edgerton, and drummer Phil Treutel have ushered in a new and exciting direction for the band and their collective sound. With all members coming from extremely varied musical backgrounds and trainings, no two Shabudikah shows are exactly the same.