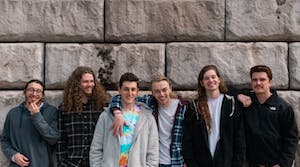 The Hourglass Kids are a five-piece psychedelic reggae-rock band based out of Chapel Hill, North Carolina. The band fuses the sonic weight of heavy reggae rhythms with the explorative nature of a jam band into an earthy blend of psychedelic music. From spaced out jazzy playfulness to full on head banging and groovy reggae rhythms, The Hourglass Kids explore a variety of sonic textures throughout the course of a show.

The Hourglass Kids played over 30 shows across the Carolinas in 2021 alongside national touring acts such as Sensi Trails, North by North, and The Quasi Kings and became a regular act in the Triangle brewery and house show scene. With new music on the way and several festival sets booked, 2022 promises to be an exciting year for this young band.